Posted on March 17, 2022 by fearnomorevision

In the year 1770, Lieutenant James Cook and his crew sailed up the east coast of Australia. They were laying claim to a mass of land that the British assumed was theirs for the taking, completely disregarding that millions of people already lived there. 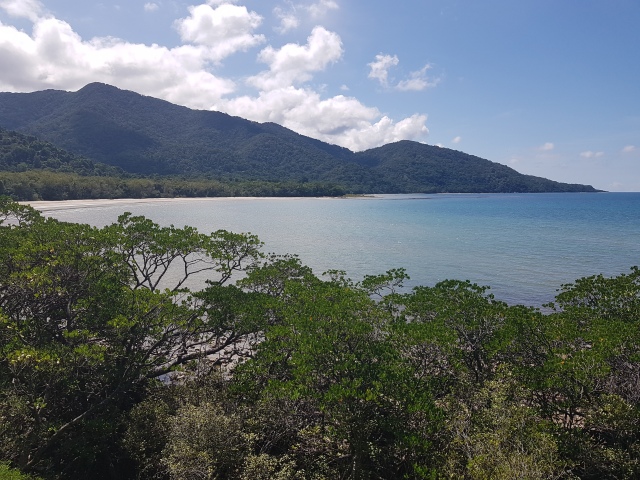 Off the coast of today’s Cape Tribulation, in the Daintree sacred National Park, Cook’s ship, the Endeavor, ran up against a reef, sustaining serious hull damage. Further north, they were fortunate to enter the mouth of a river, where the ship could be beached and repairs commenced at a place later called Cooktown. This resulted in the second “first contact” event between the English and native peoples* – the Eastern Kuku Yalanji in this case. While the ship was being worked on, an incident occurred that also led to the first act of reparation by the English toward the natives. 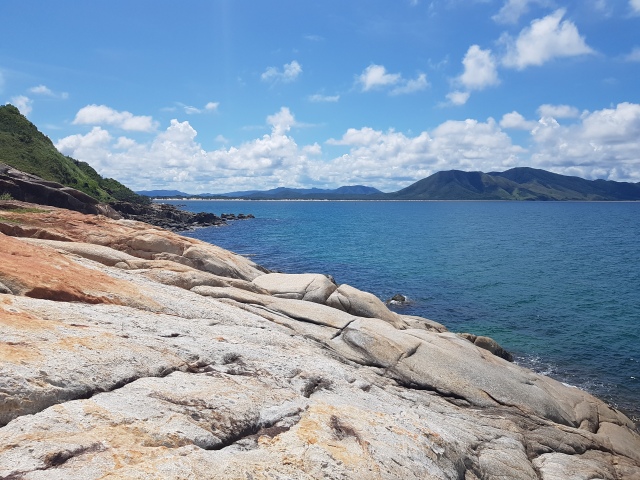 Cooktown – mouth of the Endeavour River

Unlike the little-known Chinese voyages of 1421, and the long history of sailors and traders from Asia and India, Cook’s voyage was about conquest and empire-building. The Aboriginals, and the natural world they were an integral part of, were about to be overwhelmed so completely that no reparations made today can ever match what happened. The destruction by the aliens was vast, and until recently, unrepentant.

I went to Cape Tribulation to look out to sea, to where Cook’s ship, the Endeavour, floundered several hundred years ago. Then, two days later, I stood at the river mouth where the wooden ship with cloud-like sails found safe harbour. It felt important to me to visit these two places. Maybe only some of the wiser, and more visionary elders of those days could have seen what was to come… The worlds of the Aboriginals and English were so far apart. For millennia, the Aboriginals lived free from gross materialism, within richly-storied sacred cultures, integrated with both natural and spirit worlds, stretching beyond the beginnings of human time. They showed disinterest, and even disdain, for the trinkets offered to them by the British. In comparison, the English were brutes, with no awareness of the profounder realities of existence.

From Cooktown, I drove to Laura, a tiny settlement surrounded by at least 10,000 individual sites of ancient cave paintings – a hint of what once existed across this country. As I sat before one of the caves, looking at the paintings, I saw deeper and deeper layers of stories and images of life and spirit, painting over painting. And as I sat there, I was drawn through time into a sensing of the lives of the people who came to these caves to paint, and to receive from earlier paintings the shared practical and mysterious wisdom… while their children played and laughed on nearby hillsides.

– with respect given to the Ang Gnarra people

Through all of the destruction of the clashes of culture, the Europeans and the Aboriginals are still of the same Heart, existing equally within the universal Dreamtime, where all of life is a unity. At Heart, we are all the same – so why all these presumed differences and conflicts, all the fear and aggression?

These simple questions, if really considered, may lead humanity toward a new, and finally original, existence – beyond differences, free of the fear of the “other”, resonant within this mysterious event of the pre-atomic life of the one great Being Who is all beings. Perhaps, in these clashes of crashing cultures, where everybody is coming face-to-face, there is the requirement for all of us to begin consciously participating – and growing – through these “terrible beginnings of a new culture” of Earth…

Now, I leave the northern wet tropics and head west, through vast grassy savannah country and into the deserts…

Daintree, where the rainforests meet the Barrier Reef…

*Previous contact had been made weeks earlier, near present-day Sydney, with the Dharawal people. Because Cook and his men were white, and arrived under a white cloud (of sails), the Dharawal said to them “you’re all dead!”

This entry was posted in Uncategorized. Bookmark the permalink.

7 Responses to A New Culture?